In case you missed the last post: The Biyak Plan, I intend to do a two day kayaking and biking trip in which I will tow my kayak behind my bike when on the road, and then carry my bike on my kayak when on the water.
I know I’ll need about 4 basic components: (1) bike, (2) kayak, (3) wheels for kayak, and (4) a linkage between my bike and my kayak. 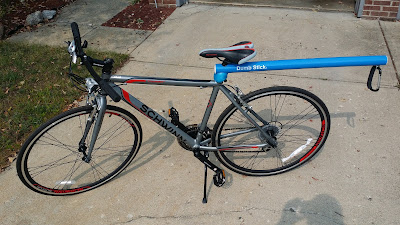 (1) Bike – I’m an avid road biker, however I prefer to ride on a mountain bike because I’m comfortable on it, and I like to “play” when I ride by jumping over pot holes and taking the rough path…  This can’t happen with a kayak in tow, but I do like the posture of a road bike.  I decided on a hybrid bike, which would give me the comfortable stance of my mountain bike with the smoother ride of a road bike.  Craigslist hooked me up with a barely used Schwinn hybrid for not much money.
(2) Kayak – I already have a Dagger Axis, which is a 10.5 ft river/lake kayak with a skeg.  What I’d like is a longer touring kayak with a rudder and plenty of storage space, but kayaks are expensive, and I think the one I have should work well enough.  It has storage space in the back only, but that should be enough for two days.  I guess we’ll see.
(3) Kayak Wheels – For this, I need something small and durable.  A friend had a pair of front wheelchair wheels which he donated to the cause.  I’d have to figure out how to attach them, but they were small enough to be quite portable.  In the end, the requirement of building a cradle and the lack of pneumatic wheels, made these wheels a poor solution.  Instead, I purchased a Shoreline Marine Aluminum Canoe Carrier, which I’ll modify a little.  I also misplaced the straps that came with it, but they weren’t great to begin with.
(4) Bike to Kayak Linkage –  I knew this would be easy (it wasn’t).  I had seen people pulling their children behind their bikes.  A kayak can’t be that much different, so I purchased a Trail-Gator tow bar from a friend, and began trying to modify my kayak to work with it. 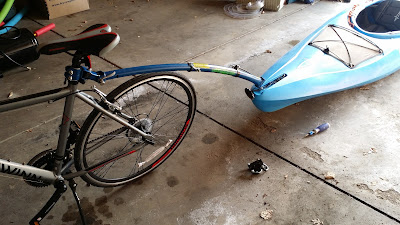 This wasn’t going to work…  The swivel point is on the bike, which means I would have to have it attached to the kayak rigidly, which is something I didn’t really want to do as it would mean fabricating parts, and possibly drilling holes in my kayak.  It seemed like there should be an easier way, so I explored other options.  I looked into getting a trailer arm that attached to the wheels, but that was going to be bulky and expensive.  Eventually, I came across the Dumb Stick, which is a super simple light weight design. 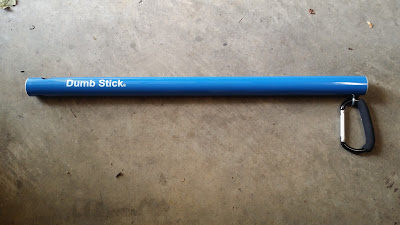 Recap:  Used Schwinn hybrid bike [$150], Dagger Axis Kayak [$650], Dumb Stick [$60], and Shoreline Marine Aluminum Canoe Carrier [$90].  Total for the main components of the rig: $950 – However I had purchased the kayak a few years ago, so the addition of the hauling rig was about $300 including the bike.  Worth it for this adventure!
Categories: adventurebikeDumb Stickkayaktrailer