With my first attempt to pioneer the sport of Biyaking cut short by a broken tow bar – the Dumb Stick, I was excited to try again a week later with some greatly improved equipment.
I took this adventure alone, in an unfamiliar area, with questionable cell phone coverage, and gear that had failed me once.  I decided I needed a safety checkpoint system to let my friends, family, and curious followers know how the trip was going, and in the worst case, know where to look for my body.  Since I had mapped my route in Google Maps, I was able to add markers, draw lines, and add notes.  It was simple enough to divide the route up into about 10 checkpoints on the map.  Checkpoint “P” was my parking location. 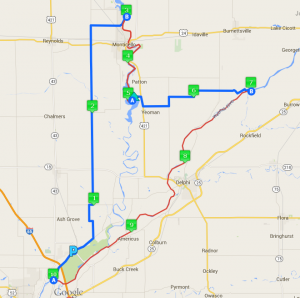 Now all I had to do was to share the map, and figure out how to notify people of my progress without interrupting my trip.  Data service with my carrier wasn’t solid, but I knew I’d have at least a bar or two for text.  I quickly created a Twitter account – @biyaking1, and linked it to my phone.  Now I could provide updates via text.  I had high hopes of doing the same for my Biyaking Facebook page, but it doesn’t appear that you can text to update a Facebook page.  My personal account would have to do.
Okay, enough technology talk, let’s get back to the adventure:  Once again, I made the hour and fifteen minute drive to Battleground, Indiana to be set up and on the road by sunrise.  A local resident came outside to see what I was doing, which I personally counted as an unofficial send off party. 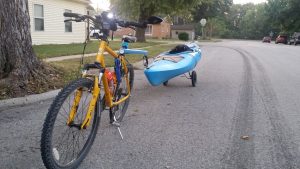 I was taking the same route that I had unsuccessfully attempted only a week earlier.  My new tow bar was three times the strength at the failure point.  I had high hopes this would be a better run!

Within my first mile, I had already been passed by two other cyclists, each of them commenting on my rig as they flew by on their road bikes.  I soon made a turn onto country roads, and the real adventure began.  These dirt/rock/gravel roads were really rough on my equipment last time, so I stopped a few times to inspect for wear…  All good.

Yes, the gravel roads were rough, but my new tow bar and adjustments to the balance of my kayak trailer did the trick!

Stopping to check the kayak and gear meant that I had to use the kickstand on my bike.  Bikes aren’t really stable with a trailer, so the bike fell over a few times.  The headlight just couldn’t take the beating and finally gave up.  Oh, and I never did pass the other biker.  They had the advantage of not carrying a kayak.  The fancy jersey probably helped too.

Alright, the first biking section was complete!  I was very excited to get on the Tippecanoe river.  By this point, I had a lot of stares while biking, and the transition to water was no different.

The section of the Tippecanoe river that I was on had a lot of speedboat and jet ski traffic.  Many times I had to turn the kayak to keep from rolling sideways with the wake, but eventually, I looked forward to it!  The damn downstream of me meant that this water didn’t flow much, so the 11 mile paddles was unassisted.

My original camping location was kinda spooky.  It was an old abandoned RV campground, and I wasn’t exactly sure I would be safe, so I decided to press on the the next location, which I knew was a legit campground.  Only problem is that I didn’t have a reservation.

Back on dry land, and back on gravel roads.  The scenery was beautiful.  I had one gravel hill that I decided to walk down since I could see a stop sign at the bottom and the trailer doesn’t have breaks.  I could see that going badly.  Walking was a good decision!

After a few phone calls, I learned that I could either camp in the camp ground for a $10 fee, or find a few trees in the adjacent property and camp for free (state grounds).  I had a great view from my trees: 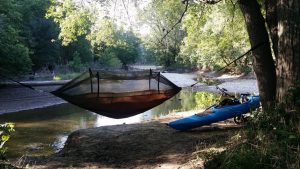 After a restful sleep, I was up with the sun and ready to head back out on the water: 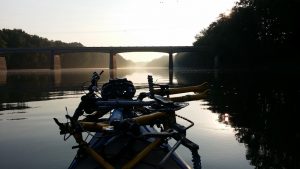 I was facing a 25 mile paddle on the Wabash.  I had to start early!  I never realized how much work this section would be, but it was well worth it!

For those who know me, you know I had to throw a shout out to my alias Joe King in the form of a pun.  This was a long day with little activity other than to just keep paddling.  The sooner I get to the end, the sooner I can go home and shower.

Running out of water and Gatorade by this point.  I had taken to rationing the items by checkpoints and turns on my map “If I can just make it to the next turn, I can take a drink of water.”  My day was wearing on, and I was starting to wonder if I would be able to finish by sunset.  I wasn’t prepared to camp a second night, but I was planning how to make it happen if needed.  Either way…  paddle on.  At the joining of the Tippecanoe and the Wabash, I met some fellow paddlers who were just enjoying the lazy afternoon.  I’m not an IPA fan, but I must say it was one of the most refreshing beers I’d ever had.  Not a good way to combat dehydration, but it was cold!

I did finally make it.  I hadn’t planned my takeout location well.  I would have to pull everything up a huge hill.  I carried my bike and a few other items up the hill, then rigged up some paracord around a tree, and began pulling.  I have it all on camera of course, including the point where I fell and slid down the muddy hill into the water.  If you’re going to fail, fail on camera!  Following the climb up the hill, I had to carry everything up a set of stairs and assemble my road rig on a bridge.  It took a while, but now I was on the last 3 miles of my trip!

Success!!!  What an amazing adventure.  I wish you each adventures of your own, and I invite you to check out the Hoosier Canoe and Kayak Club if you’re ever in the Indianapolis area.  Come join us on one of our adventures! 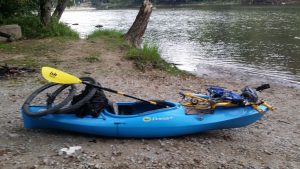 It doesn’t have to go well, it just has to be an adventure.
Categories: adventurebikingIndianakayaking

strengthened with larger diameter. pipe over the original dia. pipe at the point of the break. Is the larger dia. pipe the same material? Has it proven more durable to date?

Also, curious what material the larger pipe is? Looking to do the same mod to my new dumb stick.

Any update on this? i would like to modify my dumb stick for extra strength as well.

The larger pipe is PVC. A friend was the fella who modified it, finding a PVC pipe of double the thickness, and an inside diameter the same as the outside diameter of the original. He then sanded the paint, test fit it, applied PVC glue, and worked quickly to press the outer PVC over the Dumb Stick. Once it had dried for 24 hours, he drilled the hole at the same angle (don't know how, a wood block with the right angle I assume). Once drilled, we tested it out on the bike, and painted it again.

It is much stronger than the original, however I have no idea of the strength specs. I have a second Dumb Stick that I have not yet modified, but plan to.

I hope this helps! Please let me know if you do the mod, either successfully or unsuccessfully.

I am so happy I found your blog! I have been researching towing my kayak with my bike to a lake nearby. I have settled on the "stick stick" so that is great information. I am wondering what kayak trolley you are using?
Thank you!
Jayne

I used the "Shoreline Marine Aluminum Canoe Carrier" I found on Amazon. They don't appear to have any right now (maybe discontinued?) There are some similar options if you search Amazon for that item, or you might find it elsewhere via Google.

Let me know if you find something that works!